What is public participation in fiscal policy and why is it important?

Direct engagement between citizens and governments is increasingly recognized as a critical link in the chain between fiscal transparency, more effective accountability for public financial management, and better fiscal and development outcomes. The importance attached to public participation reflects the acceptance that citizens and civil society organisations are important agents of good governance and sustainable development, alongside markets and the state.

Public participation in fiscal policy refers to the variety of ways in which the public “ including citizens, civil society organizations, community groups, business organizations, academics, and other non-state actors “ interact directly with public authorities on fiscal policy design and implementation The participation may be invited by an official entity, such as a ministry of finance, line ministry or agency, a legislature, or a Supreme Audit Institution. Participation may also be ˜invented’ “ initiated by a non-state actor.  In either case, public participation as advocated here is intended to be open and to stand in sharp contrast to back-room lobbying that risks subverting the public interest to private interests.

While people often think of public participation in fiscal policy as being about the annual budget, it is much broader than this, encompassing engagement in four main domains:

Public participation covers both macro-fiscal policy “ the main fiscal aggregates, the appropriate size of the deficit and so on “ as well as more micro issues of tax  design and administration, and the allocation and effectiveness of spending.

Participation in fiscal policies  may be through face to face communication, deliberation or input to decision-making, through written forms of communication including via the internet, or by combinations of different mechanisms. It ranges from one-off public consultation or invitations for submissions, to on-going and institutionalized relationships, such as regular public surveys, standing advisory bodies, or administrative review mechanisms. Participation can be through broad-based public engagement as well as deliberations involving experts, or combinations of the two. It could potentially include ˜participatory budgeting’ “ where citizens vote on and decide how a specific line in the budget will actually be spent “ although, the Philippines aside,  this has generally only been implemented at sub-national government level, and public participation in fiscal policy refers to a much wider range of practices.

Table 1 sets out selected examples of public participation in fiscal policy, to illustrate the broad range of mechanisms. Details of many of these mechanisms are available in the GIFT Participation Guide. 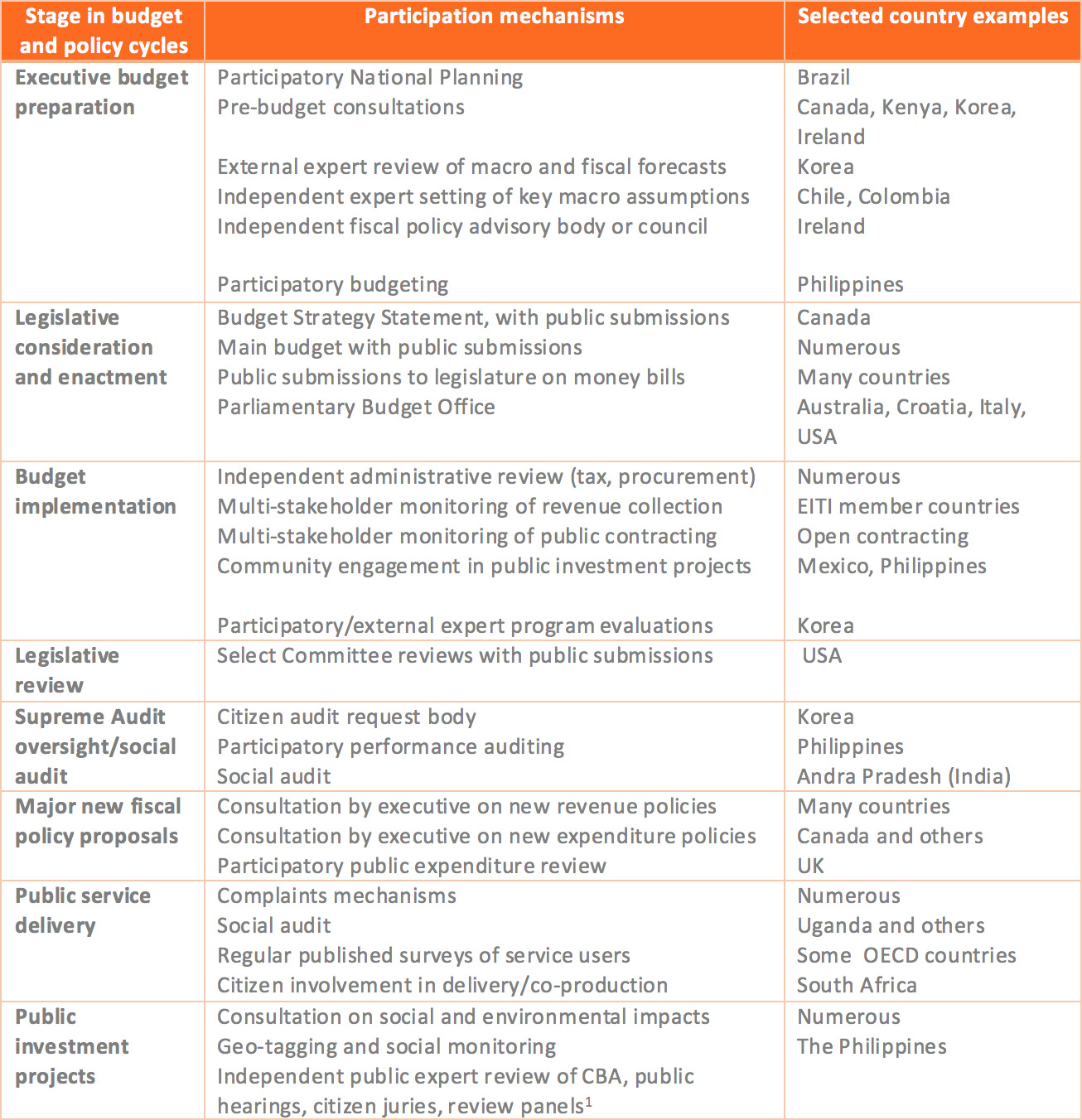 1.  As advocated for example by Flyvberg, Holm and Buhl (2004) to counter optimism bias in the appraisal of large infrastructure projects.

Where did the recent push for increased public participation in fiscal policy come from?

Starting with the IMF’s 1998 Code of Good Practices on Fiscal Transparency, the first generation of international fiscal transparency standards focused on the need for comprehensive disclosure of fiscal information. More recently, open fiscal data developments are greatly expanding the scope of information available publicly. Experience has shown, however, that disclosure is a necessary but not a sufficient condition for accountability. Attention has recently moved to translating public disclosure into more effective accountability by means of greater public engagement on fiscal management, greatly facilitated by developments in ICT. Reflecting these developments, Principle Ten of the 2012 GIFT High Level Principles on Fiscal Transparency, Participation, and Accountability established that: ˜Citizens and non-state actors should have the right and effective opportunities to participate directly in public debate and discussion over the design and implementation of fiscal policies.’ This reflected the view of GIFT’s Lead Stewards “ including the IMF, the World Bank, and the International Budget Partnership “ following the GFC, that public participation is a potential game-changer: participation could, over time, fundamentally strengthen accountability, and improve the fairness, legitimacy, effectiveness, and sustainability of fiscal policies.

Requirements for public participation have since been incorporated in:

The 2017 Open Budget Survey includes an expanded section on public participation by the executive, the legislature, and the Supreme Audit Institution, and will provide a detailed source of information on practices in the 115 countries covered by the survey.

Public participation in public policy generally is a key element of the Open Government Partnership, a multilateral initiative launched in 2011 in which 75 governments have made specific commitments to develop and implement action plans to increase transparency and public engagement in collaboration with and monitored by civil society. One of the OGP’s working groups, the Fiscal Openness Working Group, brings together ministries of finance and civil society organisations to promote peer learning and more ambitious fiscal openness commitments.[2]

More recently, the World Bank’s World Development Report 2017 stressed the potential of participatory processes to increase the contestability of policy design and implementation, leading to higher levels of legitimacy and cooperation and more equitable policies[3].

What is the evidence supporting positive impacts from public participation?

While there is a significant body of empirical evidence supporting a plausible causal link between the disclosure of fiscal information and fiscal (and to a much lesser extent) development outcomes, at this stage rigorous evidence on the impacts of public participation is more limited. It is essentially confined to sub-national government, particularly to participatory budgeting in Brazil but more recently also to other types of participatory interventions in a number of mainly developing and middle income countries (e.g. India, Indonesia, Afghanistan, Mexico, Peru, USA). In a systematic review of the rigorous empirical literature on fiscal transparency and participation, de Renzio and Wehner find that there is strong evidence linking different types of participatory mechanisms in budget processes to shifts in resource allocations (increased share of social sector spending corresponding to citizen preferences) and to improvements in public service delivery.  In Ghana, where businesses are involved in the design of tax policies, they are more likely to pay their taxes (World Development Report 2017).  Wampler, Touchton, and Borgues, in a study of 5,550 Brazilian municipalities over the period 2006-2013, find a strong and positive relationship between the presence of participatory institutions and improvements in infant mortality, and that participatory institutions, social programs, and local capacity reinforce one another to improve well-being.

While, as noted, this evidence is at sub-national level, the underlying causal mechanisms “ increased contestability of fiscal policy design and implementation, a reduction in elite influence, and more effective accountability “ are the same as for the central government-level mechanisms outlined in Table 1. The challenge now is to undertake research at the national level to test the effectiveness of different types of participation mechanisms implemented in different ways.

While direct public engagement in budgeting has fairly rapidly become established as an international norm, it is worth considering possible objections to it, which include:

Direct public participation has emerged as an important new international norm on how governments and other state entities should manage and oversee fiscal policy. GIFT will continue to support the implementation of this norm through extending and deepening the Guide on Public Participation, gathering more evidence of country practices, what works, and the impacts of different types of participation mechanisms, and supporting assessments of public participation against the various international instruments in which the norm is now embedded. We would be pleased to receive additional country examples of effective public engagement for inclusion in the Guide “ and in fact we are offering prizes for compelling stories of viable approaches to public engagement in central government fiscal policy submitted by 25 August 2017 (see http://www.fiscaltransparency.net/giftaward/). GIFT’s work program will also focus on connecting public participation initiatives more closely to the lives of ordinary citizens, by opening up the links between national budgets, public engagement, and the  delivery of local public services such as education and health care, and by increasing the effectiveness of fiscal transparency and public engagement in countering corruption.

[1] In addition, GIFT has developed an indicator measuring public participation in fiscal policy that is being piloted as a voluntary supplement in a PEFA assessment
[2] See https://www.opengovpartnership.org/about/working-groups/fiscal-openness
[3] http://www.worldbank.org/en/publication/wdr2017
[4] De Renzio and Wehner, 2017.